Following a successful run of European shows in November and December with Kurt Vile, TRUE WIDOW have confirmed a brand new set of headline dates for April 2014.

The “stonegaze” Texan trio have already been announced to play at Roadburn Festival in Tilburg on April 10th, and this new update of shows will see them hitting the UK and mainland Europe for three weeks around the festival. The band commented:

“The December tour was more about us getting out to see some new places with our buddy Kurt and his sonic death squad of Violators. The April tour is for our friends and fans!”

TRUE WIDOW released their latest album, Circumambulation, via Relapse Records in July 2013. The album of hypnotic, heavy-but-melodic shoegaze was recorded at The Echo Lab in Argyle, Texas with the band reuniting with producer Matt Pence (Yuck, Jay Farrar). At the time of recording, singer/guitar player DH Phillips commented: “I’ve always considered us a simple band but these songs seem even more boiled down, I’d say the pace is a little different as well. Things are a bit more upbeat.” Circumambulation can be ordered via the Relapse Webstore HERE or downloaded via iTunes HERE. The full album is streaming at truewidow.bandcamp.com.

The music video for S:H:S, taken from Circumambulation, can be viewed HERE. 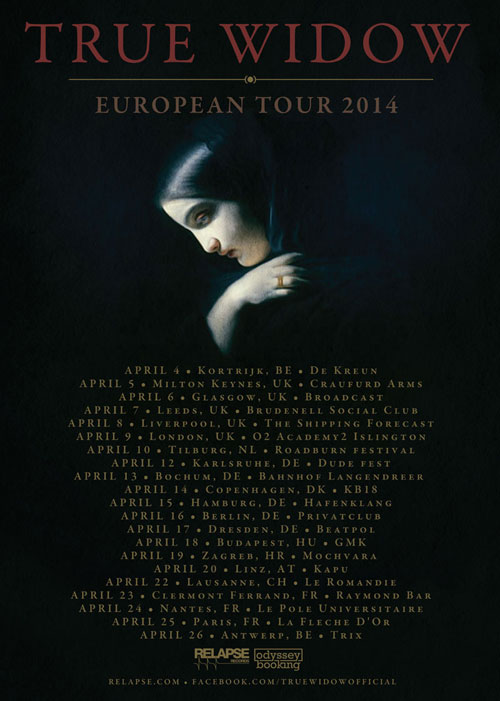