True Widow, the “reverb-drenched shoegaze” (Brooklyn Vegan) Dallas Trio, have signed with Relapse Records with an eye towards a late Spring release.

The band is currently recording at the Echo Lab in Argyle, Tex, reuniting with As High As The Highest Heavens And From The Center To The Circumference Of The Earth producer Matt Pence (Yuck, Jay Farrar).

“Returning to the Echo Lab just made sense,” explained drummer Slim TX “It’s where the previous albums have been recorded and it feels like home. The same goes for working with Matt. He allowed us to stay true to ourselves on our self-titled album and develop the sounds that would become our cornerstone for everything that has followed.” 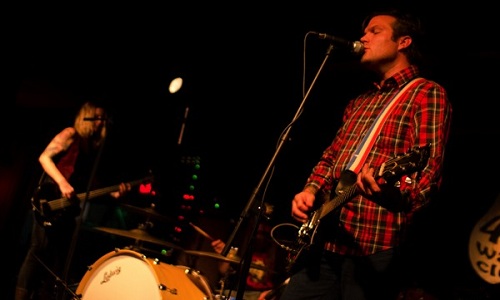 True Widow have released two previous albums: True Widow (2008) and As High As The Highest Heavens And From The Center To The Circumference Of The Earth (2011). Each release has built on the band’s unique approach to the guitar-centric intersection of shoegaze and ambient pop, which the band self-described as “stonegaze,” NPR described the band’s sophomore release as “a warming headphone album for a bleak snowfall, moody and dreamy chords crushed by a rumbling low-end,” Decibel Magazine said the album is “a droning, strung-out record that is, frankly, almost perfect” and All Music said True Widow’s guitar sound is “not so much detuned as it is shuddering.”

The band will take a brief break from recording as they head out on a handful of US dates this month: