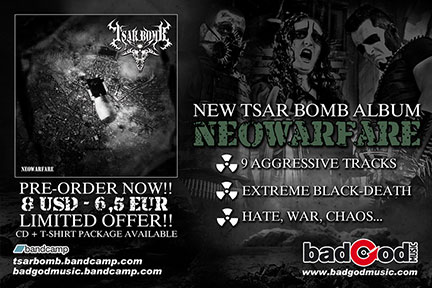 TSAR BOMB are well on their way to establishing themselves as a force to be reckoned with; not only in Spain but upon the international stage, which it intends to obliterate in the way its namesake unleashed its power just over half a century ago. The aggressive and speedy playing of Ivan (guitars, drum programming) and Lord Cabal (bass, backing vocals) perfectly displays the misanthropic and destructive title of the album. Ocram’s blackened vocals channel the Prince of Darkness in a way that seems beyond the capacity of any simple mortal. Add to that lyrical themes on the destruction of humanity through the unleashing of massive weapons of destruction developed by a degenerate group of apes (as Lucifer looks on with sadistic pleasure) andNeowarfare becomes a complete package of bellicosity.