With the release of its debut single ‘A Lifetime of Adventure’ coming up on February 07, 2014, NIGHTWISH mastermind TUOMAS HOLOPAINEN has now revealed the official music video on the track.

The video was directed by Ville Lipiäinen and includes Mika Jussila‘s photos of Tuomas Holopainen and Don Rosa in the recording studio.

You can watch it here: http://youtu.be/JWwSVOo5K_k 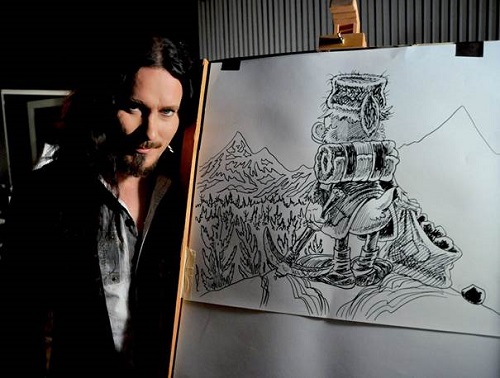 “The director, Ville Lipiäinen, and me went through some options of how to approach the video and soon agreed to shoot a sort of `making of` – clip of the song.

The idea of someone dressing up as Scrooge McDuck, and then filming him digging gold and riding an emu on an Australian desert felt just a tad corny.

Ville then followed us to London`s Angel Studios and later Petrax Studios to film some shots from the orchestra-, vocal-, guitar-, and piano sessions.

The hero of the video is Don Rosa himself. His presence and facial expressions always put a big smile on my face. I hope you`ll enjoy this adventure as much as we did!”

‘A Lifetime of Adventure’ is taken from the upcoming solo debut »The Life and Times of Scrooge« which will be out on April 11, 2014 via Nuclear Blast.

The cover artwork on both the single and the album is by Don Rosa, the illustrator of Disney’s Duck characters.

‘A Lifetime of Adventure’ that is sung by Johanna Kurkela has already been out on the NIGHTWISH FanPOD tablet-computer app on 23 January 2014, two weeks before its world premiere.

You can pre-order your copy of »The Life and Times of Scrooge« at the following address: http://georiot.co/TuomasLivetime

Hot News: Tuomas Holopainen – Tracklist of »The Life And Times Of Scrooge« released

Hot News: Tuomas Holopainen – First details about the solo album »The Life And Times Of Scrooge«