Norwegian enigmas TUSMÖRKE premiere the new track “All Is Lost” at Decibel magazine’s website. The track hails from the band’s forthcoming Riset Bak Speilet, set for international release on May 16th via SVART RECORDS. TUSMÖRKE (“Twilight”) is a strange beast. With roots stretching deep into the Scandinavian neo-progressive rock underground of the early ’90s, the identical Momrak twins recorded a TUSMÖRKE demo in 1997 but soon put the band on hiatus for several years. TUSMÖRKE returned in 2009 with a full electric lineup, and the debut album, Underjordisk Tusmorke, appeared three years later. May 2014 sees the dark minstrels return with a sophomore album, Riset Bak Speilet (”The Birch Behind The Looking Glass”). A 50-minute transmission from the heart of the darkest northern forests, the album skillfully channels the spirit of classic British acid folk rock and soaks it in a black witches cauldron. The spellbinding concoction is at times reminiscent of classic acts like Jethro Tull and Incredible String band, and also not entirely far off from modern forest magicians such as Hexvessel and Wolf People. Hear for yourself exclusively HERE. 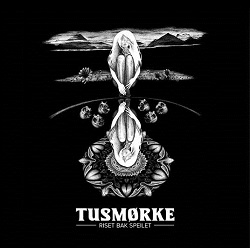 Says noted Norwegian music critic Audun Vinger, “Time is an illusion when the music of Tusmörke is played: it ceases to exist. The listener loses her grip, our knowledge no longer stems from social media or printed newspapers: everything the modern world has made us believe, evaporates. Our ears grow into cones, blood turns thin.”