UK bulldozers TWITCH OF THE DEATH NERVE have released their long-awaited debut full-length, A New Code of Morality, today on Comatose Music.

Stream selections from the album and place your orders at www.comatosemusic.com.

TWITCH OF THE DEATH NERVE was formed in 2004 as a side project of Tom Bradfield and Tom Carter from INFECTED DISARRAY and BEEF CONSPIRACY. After releasing a split CD, the pair continued with their other projects (including Grindethic Records and REPULSIVE DISSECTION) whilst at the same time working on tracks for a full length release. The line-up was later completed by recruiting DEFEATED SANITY drummer Lille Gruber, and the band began working on their debut.

The style is anchored relentless brutal death metal, drawing on influences from the glory years of the scene, but also keeping a focus on interesting compositions and adding progressive elements to the sound. A New Code of Morality is now finally complete and is presented along with some gruesomely epic Marco Hasmann artwork to complement the misanthropy drenched nihilism. 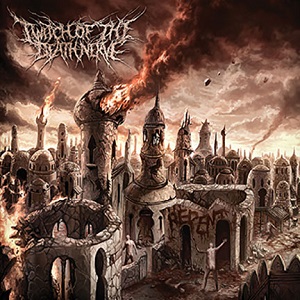 “…this is meant to be a balls-to-the-wall slab of brutality and it does succeed in this front.” – DeadRhetoric.com

“If you want gore metal that will make your head bang and hair fly then this is the record for you.”  – Two Guys Metal Reviews

Hot News: Twitch Of The Death Nerve Streaming “The Repercussions of Fetus Consumption” at GunShyAssassin.com

Hot News: Comatose Music to Release “A New Code of Morality” from Twitch of the Death Nerve April 29