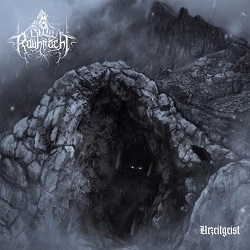 Hammerheart Records is extremely proud to announce the release of the 2nd Rauhnåcht album “Urzeitgeist” this March! The first release “Vorweltschweigen” paved the path, but was only an indication of greater things to come. “Urzeitgeist” simply is perfect in all parts, be it music, songs, production, feeling or artwork…we go into a world of ice, otherworldly creatures, blizzards and the might Alpine landscape. Under the newly invented sub-genre name of Alpine black metal Rauhnåcht started out as a project by renown Austrian artist Stefan Traunmüller, which earned respect in the worldwide black Metal community with his releases or contributions to bands such as Golden Dawn and Wallachia… being right there in the centre of the Austrian Black Metal scene (Abigor, Summoning). Then the album… this is a true Black Metal classic to be, which will make fans of Abigor (for the black Metal side) and Falkenbach (for the folk inpired side) simply go insane… look out for a digipak CD and a beautiful gatefold LP! 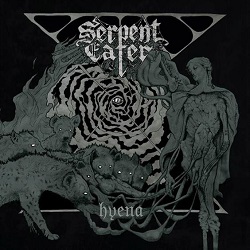 Hammerheart Records proudly presents this amazing CD-release, a new band that will make you go insane, yes, those bands still exist. Our friends of Alerta Antifacista do the vinyl, Hammerheart do the CD version of Serpent Eater’s second album “Hyena”! Serpent Eater, based out of Cologne, Germany, has been plodding forward with its current lineup since early 2012. With members hailing from Hammerhead (DE), Tumult (DE), Daskrill (DE) and Throats (U.K.), Serpent Eater has been well rooted in the DIY Hardcore Punk scene for ages. Living on anger, Serpent Eater is fueled, not dispirited, by life’s experiences and struggles. As such, the lyrical concepts employed in their work mainly focus on the weirdness and deformations of the psyche as well as the emotions of a violated mankind in modern society. Serpent Eater creates its signature dark sound to emphasize this lyrical approach by mixing elements of death and black metal to (post) hardcore, crust, heavy and dark 70’s rock, and doom to create sludgy, heavy and somber atmospheres of despair and hopelessness infused with moments of calm, sadness and melodic doldrums, only to be interrupted by sudden outbursts of sheer fury. This album will make fans of Black Breath, Nails, Pig Destroyer, Misery Index extremely happy, although happy might be the wrong word to use in these matters.