Chaos Records and Dark Blasphemies will co-release UNCONSECRATED‘s Awakening in the Cemetery Grave on July 9 with a vinyl LP version to follow later in the year. The CD can be pre-ordered at this location. Featuring all the material the Spanish old school death metallers have recorded to date, the compilation includes the Unconsecrated Cemetery (2006) and Dark Awakening (2007) demos, as well as 2010’s Slave to the Grave EP, which was previously released as a 7″ on Dark Descent Records. The material has been remastered by Skaldir at the Kalthallen Studios in Germany (2011) and cover art comes courtesy of Daniel Devilish (ENTRAILS, MALFEITOR, BLOOD MORTIZED).

Select tracks from the album are now streaming at Chaos Records’ Bandcamp page. 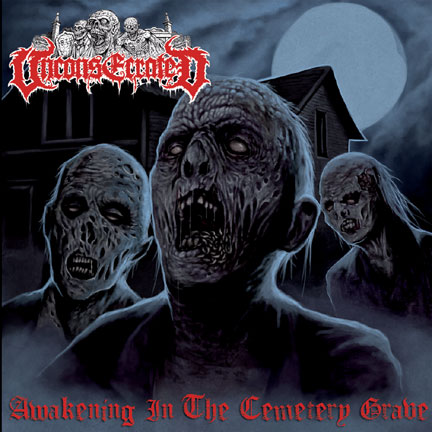 SLAVE TO THE GRAVE EP (2010)
1. Intro
2. Buried in the Crypt
3. Exhumating Profaned Flesh
4. Slave to the Grave
5. Breath of Desolation (instrumental)

DARK AWAKENING (DEMO 2007)
6. Path of the Ancient Gods
7. Dark Awakening
8. Over the Throne
9. Temple of Darkness
10. Descending Into the Abyss
11. Tombs of Fallen Angels

UNCONSECRATED CEMETERY (DEMO 2006)
12. Recremated by the Sunlight
13. Journey Into the Crypts of the Dead
14. Morbid Dawn of the Deceased
15. Unconsecrated Cemetery
16. Recently Deceased
17. The Curse of Evocation
18. Dead Forever (Unleashed Cover)

Unconsecrated was formed in April 2006 only by Dave Devour and Robert J. (guitars) with the intention of playing old school death metal like was done in the early 90s. After less of 6 months of the creation of the band and Dave playing guitar, they both started decomposing songs for what it was their first demo entitled Unconsecrated Cemetery, six songs of old school Swedish Death Metal plus a cover from Unleashed´s Dead Forever. Dave was looking for singers and drummers till he meet with Kent, singer from the Norwegian Death Metal band Unspoken, plus with the help of Lorenzo from the Ered band of Barcelona on bass they recorded their first demo in October-November 2006 with a drum machine. After some months, Dave and Robert started to decompose six new songs for their second demo entitled Dark Awakening with a more obscure and heavy approach influenced by Swedish bands like Unleashed, Entombed, Dismember. The second demo was recorded in the months of April/May 2007 and it contains 6 songs.
In December 2007 because of his lack of time, Robert leaves the band and Dave asks his friend Overlord from the old school black metal band Warcult to join. After some days, Overlord accepted. Now with Overlord in the line-up the band improved in many ways. Songs became better structured, and the sound of the band became darker, without losing that old school sound that the band wanted to keep.

Dan´s Crypt Records signed the band to release both demos. In February 2008 these see the light on a CD called Unconsecrated Cemetery/Dark Awakening.   In April 2008 Dave and Overlord checked some sounds for what would be their next release, a shared EP for the American label Relapse Records. After sending the masters to Relapse, together with another 11 bands, the label decides not to edit it, with no further explanation.

When the band noticed that Relapse would not release that Death Metal Series, Matt, from American label Dark Descent Records, decided to sign up with Unconsecrated to release a 4-song EP, which was named Slave To The Grave. I was 3 new songs of intense and putrid old school death metal in the vein of Entombed, Dismember or Carnage, real influences in Unconsecrated.  This EP was released at Halloween of 2010. This edition was limited to 500 copies, 400 in black and 100 inked in green. The band sold 100 copies in just a week, and in very little time the EP was Sold Out at the label store.

Now, Unconsecrated presents on CD all the material the band has recorded: Slave To The Grave EP, the debut demo Unconsecrated Cemetery and Dark Awakening demo. All the music has been remastered in 2011 and sounds more powerful and raw than in the original recordings. The band is now in standby mode, but there are plans to record all their songs for a full length CD. Unconsecrated hopes that every authentic death metal fan will love this CD. Spread the sickness. – DaveDevour. February 2012