AGATHOCLES have been around for over 25 years and in that time have appeared on well over 100 split 7-inch releases, as well as numerous comps, EPs, demos and full-length albums. This release sees the legendary trio take an unexpected departure from their traditional and patented mincecore style of grind and unleash two tracks that were written to compliment the power electronics of Pittsburgh’s HOGRA, who have built a solid catalog of splits, tapes and EPs over the past year.

The split is scheduled for an early September release. For ordering information, visit www.unholyanarchy.com. 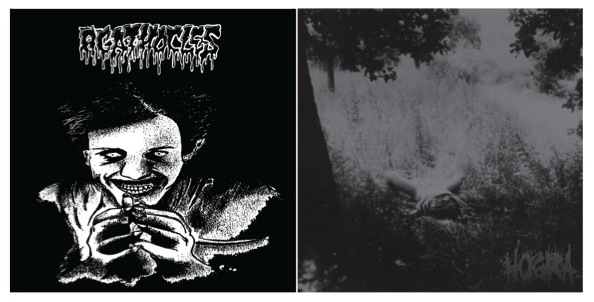 Straight from the underground comes the newly launched Unholy Anarchy Records and Distro. Launched in the summer of 2013, Baltimore-based Unholy Anarchy is guided by the philosophy to release quality underground extreme music without boundaries – the only criteria being quality music from great bands.
Run by true metal fans for true metal fans, Unholy Anarchy focuses primarily on vinyl releases, but is open to a variety of mediums from acts that share a similar vision. The label’s first release will be a seven-inch split with Belgium’s AGATHOCLES and Pittsburgh, PA’s HOGRA. Due out in early August, the split will be a co-release with Blackseed Records, Jerk Off Records and At War With False Noise.

On the distro side of things, Unholy Anarchy has hundreds of titles on picture disc, 12″, 10″, 7″, CD and cassette formats in stock. Throughout July, the label is offering 15% off all 12″ vinyl purchases and always offers free shipping on any order over $50.

Unholy Anarchy is an independently owned and operated family business that focuses on maintaining the importance of physical music formats, especially vinyl.  The label was founded with the hopes of delivering quality underground metal, punk and hardcore from artists and labels we respect.  They are dedicated to helping the scene, the bands, and delivering music to you.  Unholy Anarchy has made every effort to stock rare imports and hard to find albums for our U.S. customer base, and hope you find Unholy Anarchy a collective that you can stand behind.