“Joe is a Legend! Not just because he created Motorhead logo or breathtaking artworks for many outstanding albums. Joe is over all times and his imagination touches the Hell itself….And this is enough reason to ask him for painting „a Hellfire”  for Vader’s new music. He accepted it and… made me so proud!“

Joe Petagno adds:
“They have been on my “get in touch” list for years.  Finally we managed it and for a Killer album very appropriately titled: Tibi et Igni.”

The band has also released the tracklist of “TIBI ET IGNI“: 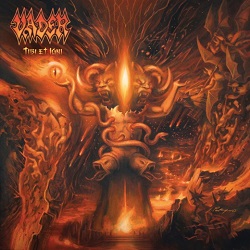 “TIBI ET IGNI” will be available as standard Jewelcase-CD, Digipak (with 2 bonus tracks), as colored vinyl with a bonus “7 EP (incl. 2 bonus tracks), and exclusively at Nuclear Blast Mailorder as limited Digipak-Edition with a signed VADER-Tourbook.
Pre-order here: http://media.nuclearblast.de/shoplanding/2014/vader/vader-tibi-et-igni.html

The 7” single is titled “Go To Hell” and includes following songs:

Side A: “Where Angels Weep”
Side B: “Triumph Of Death”

The song “Where Angels Weep” will also be available digitally.
The vinyl and the digitally version will be released on April 18th via Nuclear Blast.
You can pre-order the single (red, white and black vinyl) here: http://bit.ly/1gpRK1o
Digital pre-order coming soon!