Chapel Hill, North Carolina hard rock heavyweights VALIENT THORR will release their sixth studio album Our Own Masters on June 14 in Germany, Benelux and Finland, on June 17 in the UK and in the rest of Europe and on June 18 in the US via Volcom Entertainment.

Recorded at Ronnie Jone Sound Studios in Athens, GA and produced, engineered and mixed by Kyle Spence of experimental rockers Harvey Milk, Our Own Masters shines a bright light on VALIENT THORR‘s singular sound, delivering twelve tracks of balls-to-the-wall rock that yearns to be played at full volume.

Formed in 2000, VALIENT THORR plays loud, fast heavy music — influenced by both metal and punk — that draws creatively from touchstones such as AC/DC, Thin Lizzy and the MC5 (Motörhead might also be a point of reference here, though more in spirit than in sound). The band has a stranglehold on amped-up hard rock and stripped-down heavy metal, barnstorming stages across the world with its catchy, ass-kicking riffs, unmatched energy, fist-pumping anthems and hyper-agitated live show, led by the band’s front man and ringleader Valient Himself, whose highly entertaining, heady lyrics (the singer was once a college professor) become a call to arms for the band’s legions of devoted fans — nicknamed the “Thorriors” — that assemble in chapters and track the band from show to show, town to town. VALIENT THORR is a group that plays between 200 and 250 live shows a year, be it on stage as beloved headliners exposing the world to developing new acts (see Royal Thunder, Red Fang) or criss-crossing the globe as special guests of peers such as Mastodon, Motorhead and the Misfits.

Our Own Masters is a triumphant display of crescendo-ing riffs, rousing vocals and canyon-wide grooves and a record set to remind the world why VALIENT THORR‘s high voltage concoction of rock, metal and punk and formidable reputation proceeds them for a reason. The record’s wild, extraterrestrial cover artwork (shown below) is taken from a 1975 painting by John Aylward, father of VALIENT THORR drummer Jason Aylward. 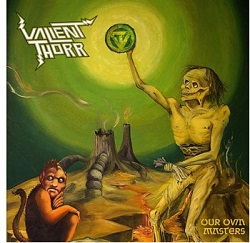 Track listing Our Own Masters: