VAMPIRES EVERYWHERE! has teamed up with AOL Noisecreep to premiere the music video for their lead single, “Drug Of Choice.” Taken from their new album, HELLBOUND AND HEARTLESS and directed by Robby Starbuck [Escape The Fate, Asking Alexandria, Pierce The Veil], the scandalous video truly captures the paradoxical squalor and glamour of the song.

Vocalist Michael Vampire explains: “In a world that considers the human form imperfect without certain robotic attributes, we must all suffer the fate of being unwanted – unnecessary – and the feeling of being less than human. Every day we wake up and judge ourselves against certain commercial fed stigmas that force our minds to consider eating disorders, self-rejection and  even suicide. Some people choose another form of self-gratification that helps them cope with the everyday struggle of being rejected and I feel this song was meant to define that notion. Whether you throw yourselves on others to feel relevant or whore yourselves out to feel instant bliss, we all struggle with being imperfect and trying to fit in. That being said, we will never fit into the so called commercial made model and thus we are all pieces to a puzzle that will never be completed.” 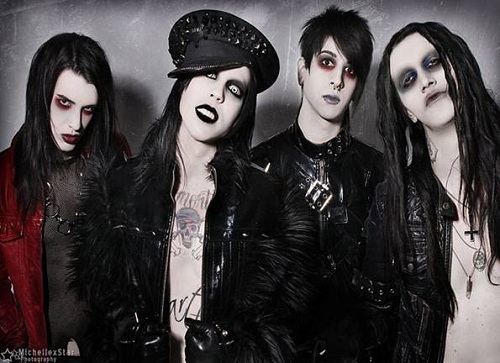 The music video for “Drug Of Choice” can be seen here: http://www.noisecreep.com/2012/07/09/vampires-everywhere-drug-of-choice-video/

Outburn Magazine calls HELLBOUND AND HEARTLESS “a heavy and aggressive contrast to the band’s previous and more polished recordings” while UnderTheGunReview.net describes the album as having “the same affected darkness that informed old school HIM…It’s catchy and slick for the most part, boasting the kind of angst-ridden, shamelessly pastiche Goth twist of continental types.”