VANHELGA was formed in Linköping, Sweden in 2001 by J. Ottosson, aka 145188 (ex-LIFELOVER (live session musician), ex-SKOGSTRON), who, unable to create the kind of music he really wanted to, found a group of like-minded musicians and together they set about bringing their vision to life. Aside from Ottosson on Bass, Guitars and Vocals, VANHELGA‘s lineup consists of J. Gabrielson (ESKAPI, ex-LIVELOVER) on Vocals, J. Ejnarsson (TAKETH) and Wadström (ex-SKOGSTRON) on guitars and D. Franzén on drums. 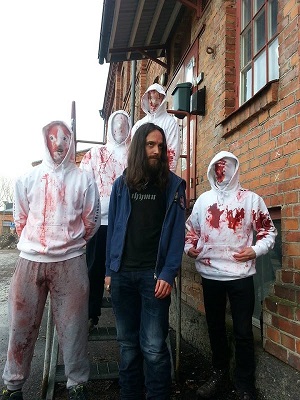 Whilst it would be easy to classify VANHELGA as a Black Metal band, in reality that would be too restrictive a definition. It’s true that lyrically the band explores the darker side of humanity, a subject much loved by the genre, indeed, the band’s name itself means “Profane”, but within VANHELGA‘s cold and sinister music can be found distinctive melodies and melancholic moments that lull you into a false sense of security and drag you into a dark reality.

VANHELGA have been confirmed to play a series of live dates in Germany in October alongside AGRYPNIE and HARAKIRI FOR THE SKY. Routing as follows.

Tracks from all of VANHELGA’s releases can be heard at http://soundcloud.com/vanhelga-official/sets/vanhelga