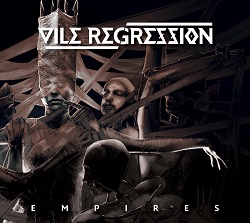 Artwork was undertaken by Bartek Siegieda (aka Splin) from Poland.

The band comments: “Bartek really took time to understand our record and really brought an interesting concept to graphically represent it. The record is very much about not being a slave to the fragility of prevailing systems and being free to be your own person. Splin envisioned a similar fragile ecoystem, a society and empire of clay golems. Born from clay they are desiccating and crumbling. The servant golems have no access to water for themselves, so in place of broken elbows / knees / necks they have rags and wires barely keeping them together. Without water their mouths dry out and their voice of discontent is silenced. The exception is the queen, who is in charge of water. She has servants that regularly change wet bandages enveloping her like a mummy, with an elaborate mist system to maintain moisture. Beautiful skin and the ability to speak however doesn’t come without a price – she can’t move from her protective wet clay, so she remains in the red chamber, distant from the crumbling empire outside. All water is entirely assigned to the production of fresh clay, from which large “pools” of new servants are formed to serve her. In a way, the queen is just as enslaved as her servants and rely on them to keep her alive.”

“Bartek realised all of this with an elaborate bandage-changing ceremony depicting a society in decline and the double standards that exist.”

‘Empires’ will be released independently on July 21st.

Hot News: Vile Regression Release Part 1 In A Series Of Behind The Scenes Videos