The ever growing army of VULTURE INDUSTRIES fans who have been eagerly awaiting the release of the band’s third full length album “The Tower”, now have the chance to hear it ahead of its 27 September European release date (1 October in North America) as it is being streamed in its entirety on the following websites: 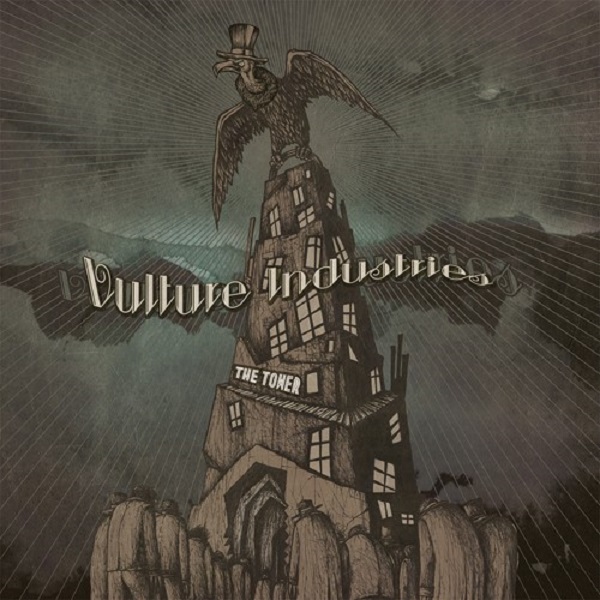 The avant-garde metallers recently debuted a video by the Romanian artist Costin Chioreanu for a track from “The Tower”. “Lost Among Liars” is an animated surreal visual critique of today’s society symbolised by a journey through a surreal cityscape populated by people and machines, each with their own different duties and functions. From the vagrant loser to the dutiful cog in the wheel of industry, to the facade of family life to the mask salesman, they are all here. Each of them tells a story of oppression, restitution, control and freedom. The video can be seen at http://youtu.be/4pw6EmsehGM

Currently in the middle of a European tour alongside fellow Norwegian’s LEPROUS, VULTURE INDUSTRIES have recently been expanding the visual aspect of their stage shows by performing alongside the HAPPY GORILLA DANCE COMPANY in “TURNING GOLEM” a project that is part concert rooted in the heavier segment of experimental/progressive metal and part theatre performance. Two more shows of TURNING GOLEM are schedule this year – 25 October at the Garage in Bergen, Norway and the 26 October and at the Phantoms Of Pilsen in Pilsen, Czech Republic.

More information about VULTURE INDUSTRIES can be found at http://www.vulture-industries.net/

The official video for the track “Lost Among Liars” from “The Tower” can be seen at http://youtu.be/4pw6EmsehGM

The lyric video for the title track from “The Tower” can be found at http://youtu.be/acZ_pm7R22Q