Austrian snuff goregrinders VxPxOxAxAxWxAxMxC (Vaginal Penetration of an Amelus with a Musty Carrot) and Kaotoxin Records have teamed with MetalUnderground.com for the exclusive premier of the video for “Embryo’s Orgasm” taken from the band’s debut MCD, In Involuntary Abortion We Trust.

Released last year on Kaotoxin Records, In Involuntary Abortion We Trust was limited to 500 copies (only a handful remain!), but the MCD’s impact will forever be felt with the cinematic sickness showcased in the video, which was produced, filmed and directed by graphic artist Dr. Winter (www.teratogen.at).

Put the kids to bed, wait 45 minutes after eating and brace yourself for a healthy dose of adult diapering, shit-porn and depraved brutality with “Embryo’s Orgasm.” The video, along with a look inside the warped minds responsible, can be found at this location.

To order one of the last remaining physical copies of In Involuntary Abortion We Trust, or to purchase a digital download, visit listen.kaotoxin.com.

Bored of all the melodic and trend oriented bands in their neighbourhoods, the urine soaked landscapes of upper Austria, four blastjunkies decided, in autumn, 2008 to end this misery and finally form the first “upper Austrian extreme-metal” band. The band got the clear and brief name VAGINAL PENETRATION OF AN AMELUS WITH A MUSTY CARROT. Since then the band worked hard and eagerly on the first songs and finally got onto stage in summer 2009. After line-up changes, including the reduction of drummer Max Gufler in exchange for the band’s very tight and sexy drum machine 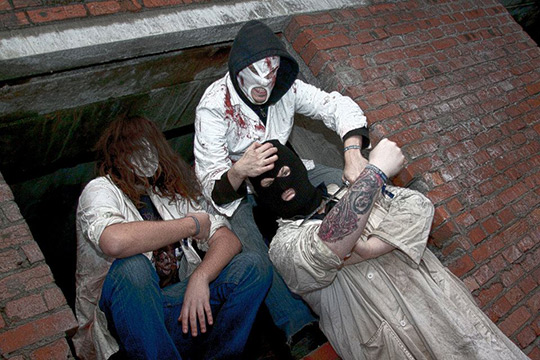 Hot News: VxPxOxAxAxWxAxMxC’s – In Involuntary Abortion We Trust MCD Out Now on Kaotoxin