Swedish Black Metal horde WAN have announced the addition of drummer Draup to their ranks. Draup commandeered the drum throne in late December to replace former skinsman Dimman, who joined the band prior to the recording of their sophomore release, Enjoy the Filth, and left shortly after its release. WAN vocalist Tsjud states: “We are proud to announce that a new skin beater have been recruited. Our northern brother Draup will from now on handle the drums, and we´re sure he´ll do a ruthless contribution.”

In late December, WAN entered Hammer Regime Studios to record new material. More news on this as it comes.

Enjoy the Filth was released in October on Carnal Records. Equal parts filth and ferocity, the followup to 2010’s Wolves of the North takes its cues from the early masters and twists it into a nightmare of sound all its own. The evil permeating this release knows no bounds.

Gun Shy Assassin is streaming the album’s title track at this location.

Ordering information for Enjoy the Filth can be found at www.carnalrecords.com.

“Enjoy The Filth slings thirteen cups of salacious Satanism your way using the recipes of old – as in ice-cold production, clangy, distorted bass, and those ever-banging Morbid Tales drums that, when done with sincerity, never tire with this gray-haired rager, especially since Mr. Warrior long ago left punk-infused dirt Metal behind for Doomier pastures.” – Worm Gear ‘Zine

“No less than 13 morsels offered by hellish servants of the dark unlight. 10/10!” 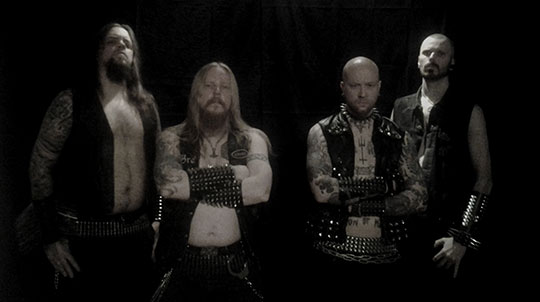 WAN started out as an unholy trinity in 2009. Coming from different bands and backgrounds the three satanic minds decided to unite their forces in order to practice aggression and to celebrate the old-school metal scene. The debut album Wolves of the North was released in 2010 and received a rather great response amongst metalheads and media. A while later WAN were joined and reinforced by drummer Dimman. With a complete line-up and with the urge for devastation they entered Studio Beast in autumn 2012 and hammered out the second album Enjoy the Filth.