To celebrate the re-emergence of this beast, New Noise Magazine is streaming the album in its entirety. Check it out at the link below: http://newnoisemagazine.com/exclusive-album-stream-artists-warfare-noise/

Warfare Noise is now out and available at store.greyhazerecords.com.

Originally released in 1986 via legendary Brazilian metal label Cogumelo Records, the album’s original masters had lost much of their audio prowess due to the long amount of time elapsed since its first release. This new album reissue, however, was carefully restored by mastering engineer Dave Eck and is, once again, available the same way as it was over two decades ago. The savage output of all four bands can be heard just as in the original version.
The packaging of this reissue was also carefully restored by graphic artist Fernando Lima and is now available as a faithful representation of the 1986 release. Aside from the insert, the packaging also includes a special poster with a depiction of the concert flier for the Warfare Noise release show which took place in Belo Horizonte, Brazil in 1986 featuring all four bands.

Despite having been out of print for decades, the Warfare Noise compilation is one of the most important documents of early Brazilian metal. It features bands that have played an important role in the development of Black and Death Metal including important influence in bands such as Mayhem, Darkthrone, Blasphemy, and Beherit. The vinyl LP version features the original eight tracks from that album. The compilation is also one of the first albums ever released by Cogumelo Records, who was responsible for the first releases by metal giants SEPULTURA. 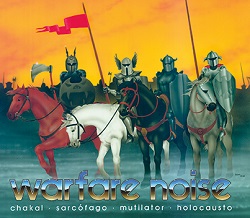