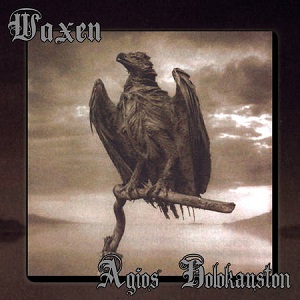 A statement from Toby Knapp reads: “Waxen is my personal, musical manifestation of the extreme negative polarity. Waxen’s debut was recorded nearly a decade ago, and this follow-up Agios Holokauston was only made possible by a cloud of darkness that once again lingered over me that needed to be transformed into an artform. I recorded this in the most primitive ways to capture the true essence of black metal. Broken, tiny earphones were used as the ‘microphone,’ and all instruments were plugged into a 4-track and overdriven by ‘maxing out’ the unit itself. My aim is to reintroduce a strain of black metal that inspired me, bands like Octinomos, Algaion, early Graveland, and Craft, just to name a few.”