Portugal’s most extreme WE ARE THE DAMNED have revealed the album cover for their forthcoming Lifeforce Records debut “Doomvirate“.

The band about the visual concept of “Doomvirate”:
“Doomvirate is a term we found that represents the vision we have about the social degeneration that increased substancially in modern days, the lack of opportunity and prospects for a steady future in society, all the political corruption around decisions that dictate an unfavorable situation for those who need the most, and its also a message of hope that we always have to watch for this people. So the visual content is basically always watch and be aware even in the darkened times we go through. Sounds like everyone knows this and it has been discussed before, but in fact it is way more serious than ever, and its never enough to bring this up.”

DOOMVIRATE is set to be released on the following dates
May 23 – Germany, Austria, Switzerland, digital world wide
May 26 – Portugal, UK, rest of Europe
May 27 – North America 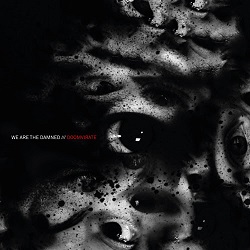 Having released two EPs and two albums already, WE ARE THE DAMNED aren’t rookies to the European extreme scene. With “Doomvirate” the Portuguese are putting out their first effort for LIFEFORCE RECORDS. Following the path of their debut “Resurrection Plague” (2010) and the 2011 release “Holy Beast” the band brings together abrasive hardcore, punky crustcore, violent death rock, and massive metal. If you think of DISFEAR, NAPALM DEATH, MOTÖRHEAD, EYEHATEGOD or ENTOMBED this exactly is the direction “Doomvirate” is taking.

Formed in 2007, WE ARE THE DAMNED are all about brutal and honest extreme music played with an authentic DIY philosophy. With their third album “Doomvirate” the band continues to deliver hard-hitting attacks and vivid eruptions. The underlying concept is based upon questions and thoughts regarding human and social rights as well as political corruption. WE ARE THE DAMNED are angry and don’t hold back!

We Are The Damned – „Rain Of Spikes” videó

We Are The Damned Interjú

Hot News: We Are The Damned reveal new album track!

Hot News: We Are The Damned sign to Lifeforce Records!