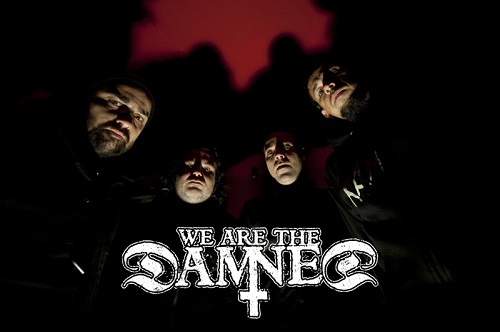 We are psyched to announce the signing of one of Europe’s most extreme bands, Portugal’s WE ARE THE DAMNED to the Lifeforce Records roster.

Coming from an unlikely source like Portugal, We Are The Damned have been building their path since 2007 by the hand of singer Correia and drummer Lafaia, who have been quite prolific since the band´s inception by releasing meaningful, brutal and honest records ever made in the Portuguese extreme music scene, both musicians have been around since the early 90´s and their sheer artistic convictions still prevail on a solid DIY philosophy. The band continues to deliever their unique blend of straight forward punk and metal.

The band supported and played festivals with the likes of Venom, Morbid Angel, Entombed, Every Time I Die, Metallica, Municipal Waste, Arch Enemy, Voivod, Napalm Death or Cancer Bats to name a few.

After 2009 “Metal Classics EP” and the 2010 debut album “Resurrection Plague”, both on Ragingplanet the band made an impact with the second full-lenght “Holy Beast” a concept album based on religious corruption and false dogmas, released in 2011 on Ragingplanet and Bastardized Recordings and produced by Ulf Blomberg (End Of All, Inevitable End, Exhale).

The album earned them many positive reviews around the world and features on magazines such asRockhard, Terrorizer, Rock Sound and Metal Hammer UK, followed by extensive touring around Europe and the UK as well as countless shows and festivals around Portugal being the most notorious a solid appearance at Rock In Rio Lisbon editon in 2012.

A few line up changes took place in 2012 after the “Holy Beast” cycle was completed, and core members Correia and Lafaia were back in the studio to complete the “Metal Classics Vol.2 EP” sessions, released later that year again on Ragingplanet. In the meantime the band kept performing live constantly and regularly till 2013.

2013 started with the 3rd album already in the making, once again with Correia and Lafaia being the core members alongside new guitarist Miguel Correia they gave birth to “Doomvirate”, another concept album this time based upon human and social rights and political corruption, produced by Fernando Matias (Moonspell, Sinistro) and the band itself.

“Doomvirate”, the band’s Lifeforce Records debut shows a much more simple mind set approach to both punk and metal styles, allowing the band to unleash with precision their objective…brutal, honest and meaningful!

We Are The Damned – „Rain Of Spikes” videó

We Are The Damned Interjú

Hot News: We Are The Damned reveal new album track!

Hot News: We Are The Damned reveal “Doomvirate” album cover!