Canada’s black/death destroyers WEAPON have unleashed a brand new music video for the title track from their Relapse Records debut, Embers and Revelations, via Noisecreep at this location.

Vetis Monarch, leader of the horde, commented on the concept and making of the clip: “This is the first official, professionally done WEAPON music video. Choosing one song off of ‘Embers And Revelations’ was tough, but we finally decided on the title track of the album because it represents WEAPON in 2013 so aptly: violent, mystical, cathartic. The video was filmed / edited by Dan Wilberg and his cohorts (who also filmed the entire making-the-album series of ‘Embers And Revelations’); suffice to say, the experience was quite different for us, being in front of a bunch of cameras and such… very different from a live concert setting. The underlying theme of the video is that of rebirth, which is in essence the underlying theme of the new album, and WEAPON itself. We also hint at some Aghori-esque elements, and we have expanded on my appreciation of daemonic principles of the female form. This video is truly a great visualization of the ideology within our music.” 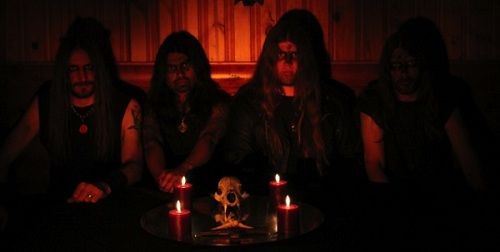 WEAPON have quickly made a name for themselves. After two successful underground LPs, the band released their third full length offering, Embers and Revelations this past October. The album is currently available for streaming in its entirety via Bandcamp here.