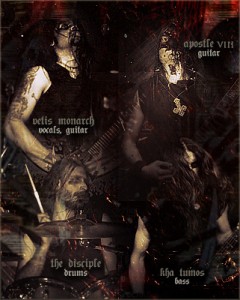 Relapse Records is proud to announce the signing of the blackened death metal juggernaut WEAPON.

WEAPON (Vetis Monarch: guitars and vocals, Kha Tumos: bass, Apostle VIII: guitar, The Disciple: drums) have previously released two full-length albums including the acclaimed From The Devil’s Tomb (2010). WEAPON is currently writing the follow-up to From The Devil’s Tomb which promises to be a more vicious strain of their all-out-evil blackened death.

Vetis Monarch commented on the recent signing and upcoming album; “Weapon is ready to take over the world, and our signing with a legendary label like Relapse Records is a key element in achieving that goal. We are in the process of writing the follow-up album to ‘From The Devil’s Tomb’, and all our supporters can rest assured that the new material is a direct continuation of the sinister and violent music we have delivered thus far. Onwards and upwards by the blessing of Lucifer…”