Top-tier stoner/doom metal band WEED IS WEED has signed a world-wide deal with Ripple Music for the release of their full-length album, Blunt Force Trauma.

Years of seismic rumbling have led way to the tectonic formation that is WEED IS WEED. Two legendary masters of Maryland Doom, Dave “Sherm” Sherman and Gary Isom, come with a stoner/doom metal pedigree second to none. Sherm and Gary have been the creative catalysts in such genre defining bands as Pentagram, Earthride, and Spirit Caravan, and now they’re set to launch their newest, blazing heavy rock venture. Having assembled their most blazing line-up ever, this group of musicians have crafted the perfect sound track for red-eyed blazers the world over –Blunt Force Trauma. Blitzed out, stoned heaviness is the order as this collection of tales of reefer madness and alligator fights is slated to be released early 2014 by the ever impressive Ripple Music.

That’s right folks… People are about to take notice. 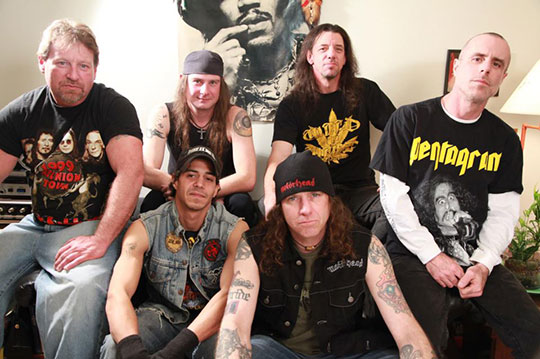 Sherm is completely shredding the vocals, undoubtedly turning in his best performance to date, as he is more than ably backed by the rip and tear of the triple (3!) guitar attack courtesy of Gary on slide & lead guitar teamed up with Jason Fisher and Rob Portillo’s riffing and rolling. Match that with the full on rhythmic assault of Darren Waters on bass, and the single moniker’d Cougin on drums, and this band is ready to pummel the unsuspecting ear drums of those about to burn!

With the ink just dry on their contract with Ripple Music, it is being announced that WEED IS WEED has also signed on with 313 INC Artist Management to help further their reach and plan their underground takeover.

Watch for some pre-release touring to be announced soon.

It’s no doubt that the riffs are gonna be huge, the vocals are gonna be gritty and the low end will rumble that PBR floating in your stomach. Weed Is Weed is taking over… and it’s going to be a smoky green revolution.