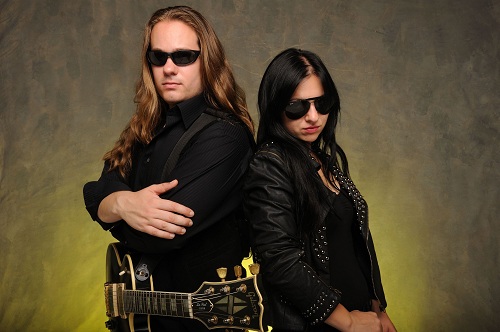 Will Wallner comments the track: “This was the last song we recorded for the album and is special because it is the only studio recording in history to feature both Vinny and Carmine Appice on drums. We wanted to have one song with them both together as they were really helpful getting this project recorded. During the song they alternate between sections and trade off between fills. Tony Franklin played bass on the song and we couldn’t be happier with the results. The song has a great groove and every musician is excellent on the track.”

Will Wallner and Vivien Vain came to America from Europe. Upon meeting each other, they discovered they shared similar musical tastes and began writing songs together. The concept for their music was to write hard rock songs they could be proud of as artists while ignoring contemporary trends. After a year of performing in Los Angeles, they had a chance meeting with Carmine Appice and Vinny Appice at the Rainbow Bar & Grill on the Sunset Strip in 2010. Having heard demo versions of Wallner/Vain songs, the Appice brothers agreed to play the drums on their debut album. Since that first meeting, the project evolved and came to feature several other guest session musicians with Will Wallner and Vivien Vain handling all guitars and vocals respectively. Their debut release features nine original songs written and produced by Wallner/Vain.

1. The Dream
2. Dreamstealer
3. Streets of Rage
4. Fourteen Twenty Eight
5. All That I Want
6. Miles Ahead
7. Soul Monster
8. Rising
9. Indestructible

Hot News: Will Wallner & Vivien Vain – Debut album to be released in Europe