On Feb 7th. 2014 German Power Metal hopefuls WINTERSTORM will release their new album “Cathyron” via NoiseArt Records. Only some weeks later they will embark on a tour with VAN CANTO.

Their goal is to enthral their fans with their passionate music. They want to contribute a new sound to the metal scene, which not only inspires inveterate metal fans. It soon became clear that exactly the right people had met after years of experience with other projects to assault the hall of fame of Metal together.

In the songs of Winterstorm there is always a distinct melody in the foreground, which is reflected in catchy choruses, a variety of instrumental tunes and manifold part singing. Distinctive elements of various styles of Metal are amalgamated and given a new interpretation. Elements of Power, Viking and Folk are combined with elements of the Middle Ages and Epic Metal, which together appear in a new splendour. This makes up an explosive mix, which goes down well with younger and older fans. A musical mix, which not only appeals to metal fans but to anyone really! This record is way more epic and varied than anything they did before; they have created a new world in which the listener can dive and escape into.

Compositions are done by Armin Haas, who has worked for movie soundtracks and video games (www.mind-eq.com) and who also does orchestral arrangements in other metal bands such as Van Canto for instance.

Another new element in „Cathyron“ are the conceptual lyrics and the story behind the album, that create a brand new world. Fitting the power and fantasy metal spectrum, the lyrics are about the fight between good and evil, and how the hero called Teron operates in the world Cathyron to achieve victory over all Evil. A tale known to most by movies such as „Lord of the Rings“. The cover artwork was done by guitarist Michael Liewald who has done all of the band´s front covers so far. The album was recorded in Fall 2013 by Armin Haas, drum recordings were done by Stephan Ernst (J.B.O., Fiddler´s Green, Freedom Call). Mix and master by Thomas Geiger, who also works with the likes of Blind Guardian, Helloween and Charlie Bauerfeind.

In Spring 2014 Winterstorm will embark on a European tour with Van Canto. So then, raise your horns and be prepared – the Winterstorm is coming up! 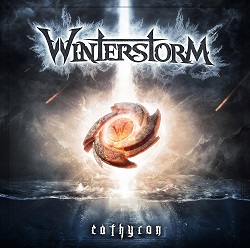