WINTERSUN have just announced new tour dates for 2013. The band will be touring through Spain in June next year! They will rock the stages in Bilbao, Madrid and Barcelona.

Here are the dates:

WINTERSUN are currently on a hugely successful North American tour with Eluveitie & Varg. The band is also confirmed to play METALFEST and BEASTIVAL in Germany as well as TUSKA OPEN AIR in Helsinki/Finland.

The band`s self-titled debut album – which was released in 2004 – instantly gained these Finns a huge and faithful following. A following that had to muster up quite a lot of patience while waiting for new material. 2012 it was finally time to unleash WINTERSUN´s second full-length album „TIME I“. Over the course of eight years the band have taken both music and visuals to yet another level and while listening to their new effort you´ll be taken on a journey through the doors of time, a journey beyond the stars, beyond the birth of the worlds to an infinite universe.

WINTERSUN – Epic Metal that breaks through the boundaries not only of music, but the universe!

Here the remaining dates of the North American Tour: 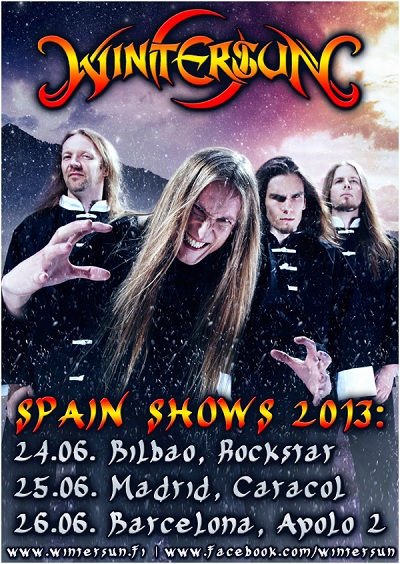