Yesterday the WINTERSUN North America tour with Eluveitie & Varg kicked off in Tempe / Arizona. It was a great, nearly sold out show and the band left a satisfied crowd behind. WINTERSUN will now tour through the USA and Canada until December 21th. The show in Ottawa / Canada ist already sold out and other shows are nearly sold out, too!

The band comments:
“The shows on our current North American tour are selling out fast! There are no more tickets available for our show in Ottawa, ON on December 14th. Montreal and Calgary are almost sold out as well, and Los Angeles and Oakland CA are getting there too – get your tickets now if you don’t want to miss out!” 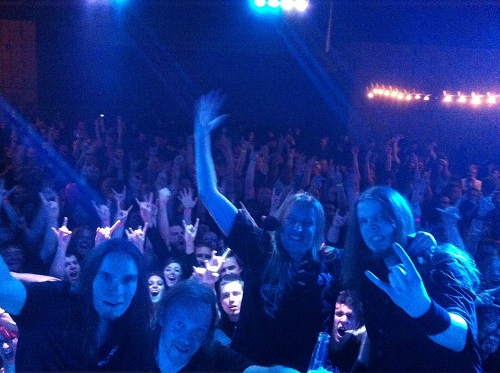 WINTERSUN mastermind Jari Mäenpää managed to become the stuff of legends with exactly one album: the band`s self-titled debut – which was released in 2004 – instantly gained these Finns a huge and faithful following. A following that had to muster up quite a lot of patience while waiting for new material. After various setbacks, “Time I”, the first part of a planned series, finally saw the light of day in Ocotber 2012! An absolute gem nestled inbetween melodic death metal and folk / black metal elements that plastered a big grin on every WINTERSUN fan`s face out there!

Here you can order the album: www.wintersun-shop.com

WINTERSUN is also already confirmed for Beastival, Metalfest and Tuska Open Air in 2013.

Here the dates of the North America Tour:

Hot News: Wintersun – Album Release Date Of „Time I“ Pushed Back A Week!