This short but significant excerpt of the track „Sons of Winter And Stars“ not only is the wake-up call for everyone interested in music, it´s the battle cry of a band that released their self-titled debut album eight long years ago and had had to live up to the highest expectations and pressure of time for the eagerly awaited successor ever since. As „Wintersun“ turned out to be a critically-acclaimed masterpiece of musical art, the band unintentionally found themselves facing the situation of having to out-do their previous work, and soon.

2012 it´s finally time to unleash WINTERSUN´s second full-length album „TIME I“. Over the course of eight years the band have taken both music and visuals to yet another level and while listening to their new effort you´ll be taken on a journey through the doors of time, a journey beyond the stars, beyond the birth of the worlds to an infinite universe.

Finland´s epic metaller will release their long-awaited album „TIME I“ on October 12 before hitting the road in October/November headlining the so-called Heidenfest tour. Recently the band went into the studio with photographer Nana Simelius to shoot the new pictures for the upcoming album and now the breathtakingly beautiful front cover of „TIME I“ has been unveiled.

“We searched many options who could actually make the cover for TIME I. Cameron´s way of creating art was just something that stood out immediately and we feel it suited best for Jari´s vision as a cover for TIME I. We are really happy for the result and hopefully this collaboration continues in the future releases as well!”

Check out a behind-the-scenes video of the photoshooting here:
http://www.youtube.com/watch?v=yeC_gzsogho&feature=youtu.be

“TIME I” will be released October 12 via Nuclear Blast, the tracklisting looks as follows: 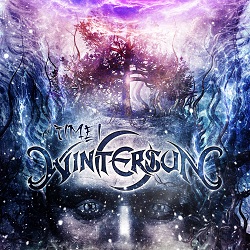 Hot News: Wintersun – Album Release Date Of „Time I“ Pushed Back A Week!