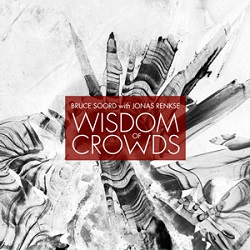 The Pineapple Thief frontman, Bruce Soord, and Jonas Renkse, lead vocalist from Katatonia have announced a June 3rd, 2013 release date for Wisdom of Crowds, their new project for Kscope.

Originally written with Renkse’s voice in mind, Soord sought out the acclaimed Katatonia vocalist to complete the compositions and release the music to the masses. Despite the rigorous schedules ofThe Pineapple Thief and Katatonia, the two musicians were eventually able to connect.

Both artists are currently enjoying unparalleled success with their main bands.

The Pineapple Thief have just completed a successful European tour following the release of their latest album, All The Wars in September. Rocksound described All The Wars as “an album of Muse-like, slow burning guitar anthems”, while Classic Rock stated it was “the sound of a band reaching the height of their powers” and Prog argued it was an “elegant, sophisticated work… moody and meaningful, introspective and universal.”

Katatonia also released a new album last year. Dead End Kings was released on the Peaceville label in August and reinforced their position as “one of the most consistently fascinating bands in modern heavy music.” (Metal Hammer, 9/10). The album featured heavily in the album of the year polls of magazines around the world and was also nominated for a Grammy in the band’s homeland of Sweden.

Elmarad a Wisdom Of Crowds koncert