WIZARD have finished the recordings of their upcoming album, which will be entitled “Trail Of Death“!

The new album won’t be a typical concept album, but it’s main theme will be death.

There will be songs about death by electric chair, a soldier who’s killing others during war, death due to illness or life after death.

The cover artwork of “Trail Of Death” was created by Jens Reinhold of ZENZ-ART, who is also responsible for album artworks for bands like Sodom, Freedom Call or Enemy Of The Sun.

The artwork features the reaper who’s carrying something like a petrol lamp with a burning soul in it. The lamp is a metaphor for burning in hell for eternity.

According to WIZARD, the meaning behind the artwork is simply “You can’t escape death. Everyone is going to die.” 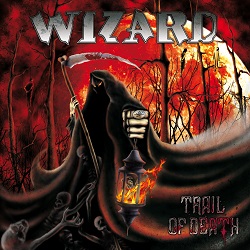 Drummer Snoppi commented:
“You may be scared if you confront yourself with death. But you have to decide how you deal with it.
Lucky are those who are able to ignore this subject, those who have lived a happy and fulfilled life and those who have found hope in religion. But there are also the ones who are left behind: victims, sceptics, sufferer and everyone who’s lonely.”

Given this insight, it’s possible that most of the new songs won’t be very cheerful.

WIZARD‘s new album “Trail Of Death” will be released on September 27, 2013 via Massacre Records and will be available as CD, limited vinyl LP and digital download!