English Heathen Black Metal band Wodensthrone have just finished recording their second album, tentatively entitled ‘Curse’, at The Priory Recording Studios in Sutton Coldfield, England, with Greg Chandler (founding member/guitarist/vocalist from UK doom horde Esoteric) at the helm engineering, producing, and mixing this new full length. The much-anticipated follow up to debut album Loss features eight tracks which demonstrate what the band are calling their darkest, most intense, yet diverse offering thus far. Scheduled for an early 2012 release, the album will be Wodensthrone’s first worldwide release on Candlelight Records since their signing with the infamous label in 2010. This record will also mark a new beginning for the band vocally, as founding member Brunwulf recently departed the clan amicably, which made way for guitarists Wildeþrýð and Rædwalh to take over all vocal duties. 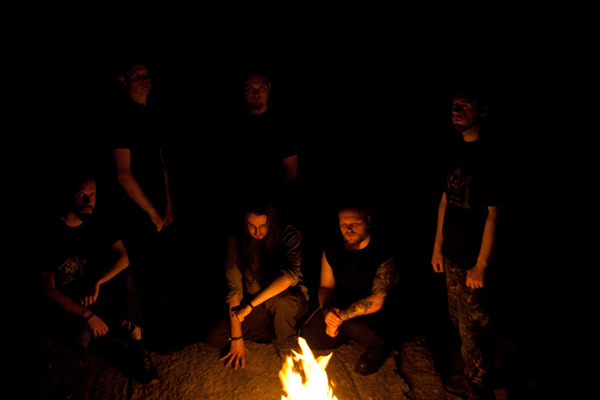 Speaking on behalf of the band, guitarist and vocalist Rædwalh states, ‘The departure of Brunwulf presented us with an opportunity to either find a suitable replacement, or for Wildeþrýð and I to take on the responsibility ourselves. After much thought we decided to keep the band as a five piece, as it would be hard to replace our brother Brunwulf, whose vocals were very distinctive and integral to our sound, but also because we felt no need to replace him with any new blood since the chemistry in the band feels just right at the moment. This sophomore recording will also feature Arfæst on synths, who has been a part of our brotherhood and live rituals since 2009. He has been an integral part of the writing process for this new record, musically and lyrically. So this marks a new chapter for the clan in more ways than one. We displayed passion and total dedication to the writing and recording of this opus and we look forward to unleashing the Curse early next year. Wæs þu hæl!’