Candlelight Records today confirms April 22 as the European release date for Withdrawal, the third album from black metallers WOE. Produced by vocalist/guitarist Chris Grigg and mastered by Colin Marston, the album features seven new songs with a running time of 43 minutes. It is the first new material by the band since 2010’s widely regarded Quietly, Undramatically. Withdrawal reunites the band with artist and long-time friend Justin Miller.

“I spent a ton of time focusing on the production,” says Grigg in discussing the album’s creation. “We examined what Woe created since its inception in 2007 and broke it down to its core elements. The result is something that is a synthesis of the strongest elements: the unstoppable black metal ferocity of A Spell For The Death of Man mixed with the bold dynamics and smarter, more direct and personal songwriting of Quietly, Undramatically. It is our most intense, our most cohesive, our most personal.” 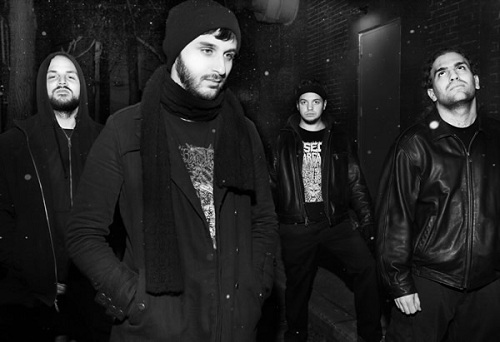 Recorded at studios in New York and New Jersey during the latter months of 2012, Withdrawal is a robust and penetrating album. It benefits from 18-months of live performances; something unavailable to WOE in the early years. “This is music that was made to be performed live,” Grigg notes. “Working with other people keeps WOE fresh. They bring new ideas and perspectives, fill in the gaps of my own abilities, and keep things moving when I slow down. This is the first WOE album to include not just riffs written by others but entire songs. Ruston (Grosse, drums) wrote “Ceaseless Jaws.” Ben (Brand, guitar) wrote the initial draft of “Exhausted” and then we reworked it. It’s also the first album to include vocals other than mine: Grzesiek (Czapla, bass/vocals) doesn’t just do backups; he has entire verses in a number of songs and is more “second vocalist” than anything else.”

A/V Club calls WOE, “one of the best of a strong wave of young American black metal bands willing to play around with the boundaries of the genre.” Metal Sucks says, “sincere and relentlessly creative, WOE put a new spin on an old method. The band crafts something that gives you a good sense of the possibilities that STILL exist in the genre. This is the sound of black metal to come.” Popdose adds, “WOE burns the black metal rule book to create something wholly unique and desirable.”

Originally launched as a one-man project, WOE released their debut, A Spell For the Death of Man, before teaming with England’s Candlelight Records in 2009. Their label debut, Quietly, Undramatically, was released late October 2010 and immediately found praise. Decibel called the album “an intriguing, revolutionary blend of black metal and shoegaze-tinged post-rock sophistication.” Terrorizer found it to be, ” a raging slab of barely contained aggression, immeasurable parthos, and damn fine songwriting.” Shortly after release, WOE was invited to perform at the March 2011 Scion Rock Fest in Pomona, CA. The band would follow that up with a number of regional dates before heading out with Mayhem for their American tour later that year.

Full track listing for Withdrawal is: 1. This is the End of the Story / 2. Carried by Waves to Remorseless Shores of the Truth / 3. All Bridges Burned / 4. Ceaseless Jaws / 5. Song of My Undoing / 6. Exhausted / 7. Withdrawal