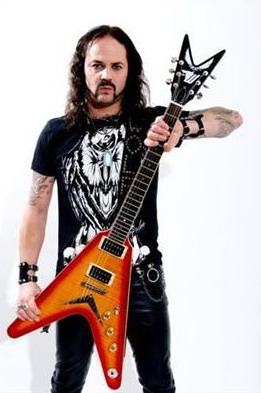 Axeman: “It’s with a heavy (Metal) heart that I announce that I’m stepping down from my duty’s in the second best band in the world; WOLF. It was a very tough and difficult decision to make since I love WOLF & Heavy Metal but I simply can’t give WOLF 666% at this point. It’s not fair to the fans, the boys or me to not give it all and I need to step down. The downward spiral of the musicbizzniss which makes bands and musicians work harder & harder and trying to survive has taken its toll on me. I’d like to thank all, and I mean ALL fans for the ride of the past 9 years. I am a fan of yours so I love you all to death! Also thanx to WOLF members past & present for sharing the life and giving me the opportunity to express myself thru music. I am deeply proud and honored to have made music with you! I started my relationship with WOLF as a fan and now I get to end it as a fan. Thank you all, 666 times over & over. You WILL hear from me again! Oh…and Celtic Frost rules!“

Niklas Stålvind (vocals, guitar and founder of WOLF): “On behalf of the band I would like to thank Johannes for his work in WOLF and for the many great memories and laughs since his first appearance with the band in Wacken Open Air 2002. What Johannes Axeman doesn’t know about Heavy Metal is not worth knowing. One episode that comes to mind is when we met legendary Thrash Metal band Hirax on a festival in Germany. Hirax’s frontman Katon and Axeman started discussing Metal in general and numerous bands in particular. Katon, well known for his knowledge about every underground band in the scene soon gave up, proclaiming: ‘This man is a fucking Metal encyclopaedia!’
Johannes is also a natural born entertainer, always in love with the audience. One of many, many stories I remember is when we played in Nottingham and there was a drunk punk rock girl standing front row, mocking us. I tried to ignore her, but she was kind of getting on my nerves anyway. All of a sudden came Axeman with his axe in one hand and a beer in the other. The very surprised looking punk girl got the beer, and the rest of the show she was head-banging insanely with a smile on her face. He turned a punk into a Metal head with a beer.
Axeman is probably so Metal he is even contagious. WOLF wish Johannes Axeman, the Metallest man in the world, the very best in the future! May you never rust. HAIL!”

Jens Prueter (Head of A&R, Century Media Europe): “I don’t know many people that are more Metal than Johannes Axeman. He’s a great guitarist and insane entertainer. Good memories from start to finish. The legendary video interview at Bang Your Head 2007 and the great party we had at the album release party at Die Burg in Dortmund a couple of weeks ago. In the name of Century Media, I want to thank Johannes for three amazing albums and a lot of good shows. Horns Up and hope to see you soon again Axeman!”

Axeman’s last appearance and farewell will be in the “Skull Crusher” video from the latest album “Legions Of Bastards” that will be debuted on the covermount DVD of German Rock Hard magazine coming in stores July 20th, 2011. The video will go online shortly after Rock Hard’s street date for the legions of all non-German fans. An exact date will be announced soon.

Axeman will be replaced by Simon Johansson who released his first album in 1995 with Abstrakt Algebra and is nowadays playing with Mike Wead from King Diamond in Bibleblack and a member of the underrated Swedish doom pearl Memory Garden since 1996.

Simon already helped out WOLF in 2009 when they supported WASP for 4 shows. Please give him a warm welcome on the following WOLF shows:

Hot News: Wolf – Return to the UK With Evile!