NoiseArt Records and Rock The Nation are very proud to announce the signing of Pagan Metal warriors WOLFCHANT.  WOLFCHANT has established itself in the German and internationalen Viking/Pagan metal scene within the last years and has acquired a big fan base due to their energetic live shows and killer performances. The band will release its highly expected fifth studio album “Embraced By Fire” via NoiseArt Records on March 1st 2013. 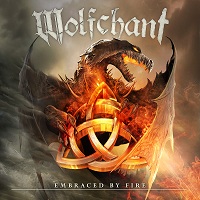 Comment of the band:
“We are very delighted and are looking forward to the cooperation with Noiseart Records / Rock The Nation. We are very proud to have the possibility to release our new album together with such a reliable and professional partner.”

Comment of NoiseArt Records:
“We are very glad that we have, with WOLFCHANT, catched the next big fish and that we`ve got the chance to extend the NAR roster with another high calibre band. We have big plans with WOLFCHANT and are looking forward to a successful future.”

WOLFCHANT – Call Of The Black Winds