Midwestern metal cult, WOLVHAMMER, has put the final touches on their third studio full-length, and today unveils the album’s full info including the cover art and a short trailer.

The core of WOLVHAMMER — vocalist Adam Clemans (Shaidar Logoth), guitarist Jeff Wilson (Abigail Williams, Chrome Waves, Doomsday, ex-Nachtmystium), and drummer Heath Rave (ex-Across Tundras) — infiltrated Hideaway Studio in Minneapolis, Minnesota in March, with Dan Jensen at the soundboard, pounding out eight new hymns for the nearly fifty-minute-long Clawing Into Black Sun. The outfit’s volatile amalgamation of black metal, death rock, and punk has morphed into quite the killing machine over the years of self-infliction, abuse, and debauchery, and on their third LP has straightforwardly culminated into their best work yet. WOLVHAMMER‘s songwriting and musical delivery has developed immensely, honed with a new sense of focus since their vicious and acclaimed 2011-released Obsidian Plains album, and has reached a new level of maturity, yet each note still casts an eternal feeling of trepidation and misery.

Clawing Into Black Sun will see release through Profound Lore on Tuesday, July 8th. The album’s cover art by Stavros Giannopoulos (The Atlas Moth, Chrome Waves, Twilight) and more has been integrated into a short trailer, now playing HERE. 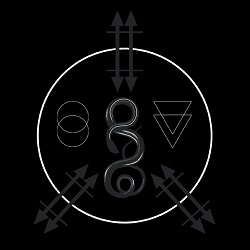 1. The Silver Key
2. Clawing Into Black Sun
3. Slaves To The Grime
4. The Desanctification
5. Lethe
6. In Reverence
7. Death Division
8. A Light That Does Not Yield

While their last tour run saw them on a successful run supporting The Black Dahlia Murder and Skeletonwitch, coinciding with the release of Clawing Into Black Sun, the WOLVHAMMER outfit — bassist Joe Noel (ex-Samothrace, ex-Altar of Plagues live) and guitarist Brendan Seven completing the lineup — will announce a barrage of live assaults and widespread touring in support of their most punishing and accomplished offering yet. Additional updates on WOLVHAMMER‘s upcoming plans and tunes from Clawing Into Black Sunwill be released over the coming weeks.