MORIBUND RECORDS sets April 14th as the release date for WORMREICH‘s Wormcult Revelations. Rising from the ashes of the late, great Blood Stained Dusk comes USBM’s most promising sonic sorcerers, WORMREICH. The band’s second album to date and first for MORIBUND RECORDS, Wormcult Revelationsdisplays a black metal band both forward-thinking and classicist, balancing an oft-dissonant and complex form of challenging, spiraling songcraft with a widescreen, cinematic scope that underlines a deep understanding of ancient black metal values. Rounded out by a clear, nuanced production, Wormcult Revelations will soon have WORMCULT mentioned in the same breath as the esteemed likes of Nightbringer and Deathspell Omega, whom WORMREICH cover with “Malign Paradigm.” 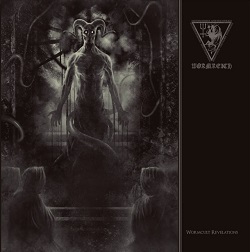 Comments the band, “WORMREICH was created with the sole purpose of channeling the timeless void that will one day consume the universe and return all of creation to a state of pure, undefiled chaos. We emerged from the Bible Belt of the United States, with Satan as our champion and idol, and we create menacing, violent, ethereal black metal art. Nothing more, nothing less. Our war is a holy war, and our devotion is endless!”

WORMREICH was spawned from the endless void in early 2009 by Vulk Obsidiam (Viidron, ex-Anociticus) with the sole intention of exploring the concepts of Luciferianism and spiritual perversion through intense, dissonant, atmospheric, and ideologically-driven black metal. Soon, he was joined by N. Vathron (Viidron, ex-Firth of Damnation), a musician with similar vision and philosophy. Their self-produced debut full-length, Edictvm DCLXVI, was released on May 27th, 2011 through V’s own label, Idolatry Records. A short time later, drummer Profana (Blood Stained Dusk, HaXXan, Octagon, ex-Ancient) entered the covenant. In January of 2013, WORMREICH entered Stargate Studio in Huntsville, AL, USA, with producer Lance Wright (ex-Quinta Essentia, Abraxas) to record their latest mass and first for MORIBUND, Wormcult Revelations.