Wreck & Reference‘s new 11-song album, Want, has been slated for a June 10th release on CD, LP and Digital formats through SF-based dark music label The Flenser.  37 minutes in length, Want was recorded by the band and mixed/mastered by Jack Shirley (Deafheaven, Whirr, Loma Prieta) and sees Wreck and Reference taking a new sonic direction while maintaining their hold on experimental, electronic, and post metal genres: a trainwreck of contradictions that is devastatingly addictive.  In conjunction with their new album release, Wreck & Reference has been tapped as support (alongside Pallbearer) on the upcoming Deafheaven tour which starts June 8th in Boston and ends July 2nd at the Great American Music Hall in San Francisco – check out the full routing below.

Formed in 2011 by drummer Ignat Frege and instrumentalist Felix Skinner, Wreck & Reference play by their own rules and create a sound that is unorthodox and captivating using drums, vocals, and computers.  The band released their demo Black Cassette that same year, which immediately turned heads from critics and fans alike.  The following year, Wreck & Reference released their debut full-length, Y̶o̶u̶t̶h̶,to more critical praise.  Even more dark and mysterious than its predecessor, Y̶o̶u̶t̶h̶ catapulted Wreck & Reference to the forefront of unconventional heavy music.  The band released their landmark effort C̶o̶n̶t̶e̶n̶t̶ in May of last year, also on The Flenser, which was called “weirdly heavy and unnerving” by NPR.

Song premieres, pre-order information, and more tour dates coming soon for Wreck & Reference‘s Want.  In the meantime, check out a segment of a new track alongside footage of Wreck & Reference in the studio here. 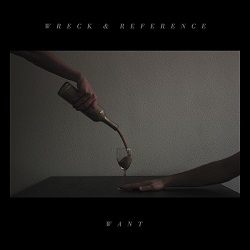 Want Track Listing:
1. Corpse Museum
2. Apollo Beneath The Whip
3. Stranger, Fill This Hole In Me
4. Bankrupt
5. A Glass Cage For An Animal
6. A Tax
7. Flies
8. Convalescence
9. Machine Of Confusion
10. Swallow
11. Apologies

Hot News: Wreck and Reference To Release New 7inch, Content, on May 21st via The Flenser