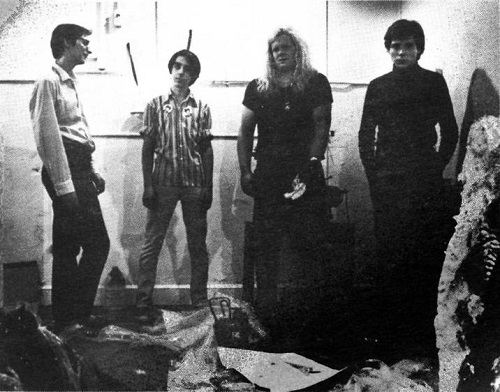 Pronounced “ex blank ex,” the name also doubled as a mental exercise in which a person could insert random words or phrases between the two letters in the moniker. Hence, Morton’s jab at the Rolling Stones’ sagging legacy for the title of this hotly-anticipated retrospective: X Sticky Fingers X. Compiling a couple of prized singles with a feast of lo-if but raging live and rehearsal material, the album boasts radical revisions of several Electric Eels classics alongside tunes that would appear drastically altered on a Styrenes LP and on Klimeyk’s solo 7″. As if that weren’t sufficiently tantalizing, underground-culture historian and journalist Jon Savage penned the hepcat liner notes that accompany this “really boss set” of “mean sounds aimed at making your feet move.”

But forget that jive. The main lure is Morton’s ridiculously potent cocktail of brute force, no-wave squall, and nihilistic art-prank. Pissed-off vocals, ass-kicking riffs, a hard-charging rhythm section, and the whirr of onstage circular saws split the air. Yet somehow, tracks such as “A,” “Drapery Hooks (of My Love),” and the grammar-flouting “Your Full of Shit” manage to be catchier than syphilis. Moments of genuine confusion abound, too: “Rattler” stops dead before it truly starts, and a snatch of audience vérité purports to be a cover of “I’m So Fucked Up,” a “song” by one of Morton’s previous “bands” Johnny & the Dicks – in this case, a purely conceptual one that never played music. (Joke’s on you, pal.)

Nowadays, X__X‘s erstwhile leader resides in the hinterlands of New York State, a base from where he paints, sculpts, writes, draws, snaps photos, churns out giclée prints, chops wood, and occasionally travels to perform with the Dunking Swine of Chelsea, Scarcity of Tanks, and the charmingly-christened New Fag Motherfuckers. Despite these numerous pursuits, he still found time to design the package and supervise the production of this definitive anthology. Cover and tracklisting are as follows: 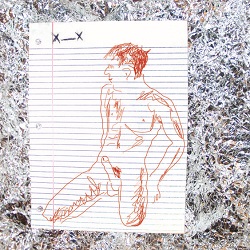