Orchestrated Misery Recordings is proud to announce the September 11th release of Disgust from Indiana’s YELLOWTOOTH. Fuzzed out, sludged up, pumped full of death, and stoned out of its goddamned mind, Disgust is the product of a veteran trio of 40-somethings that have done time in CHRONIC DISORDER, SEA OF TRANQUILLITY, SHADES OF GREY, SKULLVIEW, NOCTURNAL TORMENT, and INVASION. Yeah, they’ve got the cred, the chops, and a whole lotta ugly! Now this is the sound of decay. 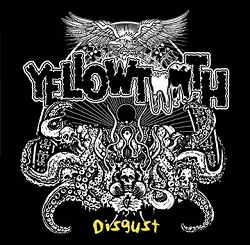 What is Yellowtooth? It is a band that has been in theory for several years, but the planets and sun would never align to allow such a debacle to exist. Consisting of two members from the Michigan City band CHRONIC DISORDER and a roaming nomad named Clemens, the three found themselves in a dark basement in the spring of 2008 planning on world domination. In all actuality, the three ended up drinking the night away, talking about old influences, and the new sounds emanating from the underground.

This is where the story begins…

Yellowtooth is made up of Henry McGinnis (guitar/vocals), Ed Kribs (percussion) and Peter Clemens (bass/vocals), all veterans of the music scene since the early ’90s. Both Ed and Hank could be found jamming the heavier tunes in an age where pop and crap mixed hand in hand. In the early ’90s they formed CHRONIC DISORDER and proceed to assault the locals with their brand of metal. Clemens, on the other hand, delved deeply into the sounds of death metal and heavy thrash with SHADES OF GREY and SEA OF TRANQUILLITY, finally landing on bass for the classic metal band SKULLVIEW. 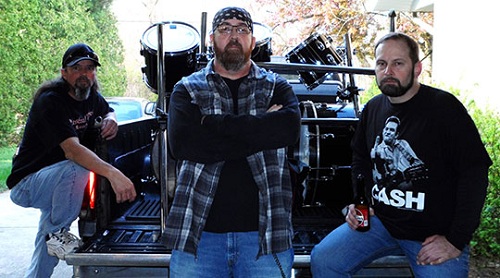 With the advent of fuzz/stoner rock, the disharmonic sounds of sludge and a coming of age (all members are over 40), the boys in northern Union country found a longing for playing music that melded their influences with their particular writing styles. Thus began the essence of Yellowtooth.

If you’re lucky enough, or privileged enough, you should be holding some form of release from this band: a demo CD, cassette or some bootlegged mp3 material that we’ve passed along. Please enjoy it. We haven’t reinvented the wheel, but added a couple burs and nicks on the outside!