The longest living spanish Heavy Metal band of Spain (active even before BARON ROJO) usually all 2-3 years has a new high class album on the market. But equally to their colleagues who were also active since the late 70s or early 80s also ZARPA had a distribution problem outside of Spain. In the meanwhile all their albums are released in CD-format, but only the half of them were available worldwide. For luck the new one “Bestias del poder” will be as easy to get as the four precedessors.

So fans of extraordinary true 80s sounding steel will become happy again. ZARPA is, was and will be Spains No.1 in Metal! Check out the killer song “El reino de la verdad”.

Metal at its best like we are used from this band! 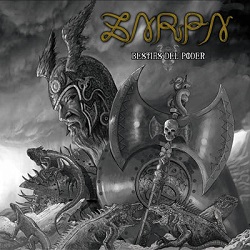