The first two studio albums of the Norwegian Band ZENO MORF were already released in 2009 and 2010 by our sublabel Karthago Records. Now, three years later, they release “Kingdom Of Ice”, their third CD via Pure Steel Publishing.

Once again, the four guys founded in 1987 have twelve flawless, authentic Heavy Metal Songs and no convinced headbanger will be disappointed. Backing choirs (the opener “Hammer Squad”), straights drumming with tons of double bass, clean played twin guitar leads and a basic production are one of the great strengths of this band. Catchy, pounding riffs in the best Accept-style with Maiden-influenced solo parts and with rough shouts hit on melodic vocals are attributes of ZENO MORF. In the tracks “Home Of The Brave” and “A Question Of Fate” one remembers of the old brilliant Running Wild, while in “Coming Home” Black Metal blast parts appear.

ZENO MORF performs classic Heavy Metal in an absolutely independent way, for which they deserve your support! 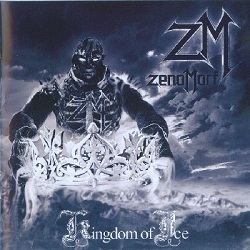