Swedish melodic metal band Zephyra signed a deal with Wormholedeath for the release of their debut album “Mental Absolution”. The record, produced by Jonathan Mazzeo, will be released worldwide by Wormholedeath/Aural Music by the end of the year and features the following tracks: 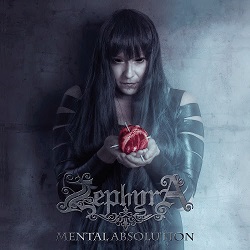 About the band:
The band started for real in 2011, with a very clear agenda, moving forward.
Since then, the band has released a couple of EP:s, played shows around Sweden (among others on NEMIS Stage on Metaltown 2012), done live shows on the radio, and frequently been aired on the american Women of Metal Radio Show (Zephyra was also chosen to be their band of the month in february 2013).
The next natural step is to show the world a well produced album, to break new grounds for the future!
A full preview for the track ‘Undone’ can be streamed via the band’s Youtube channel at this location:

“We are very thrilled to announce that we have signed a deal with the great label Worm Hole Death.  The collaboration is strong, and started in the beginning of last year. At that time we began working on the pre productions of the songs for ’MENTAL ABSOLUTION’, our debut album. The opportunity to work with a label as eager and committed as we are, feels like a deal of a lifetime.  MENTAL ABSOLUTION’ is recorded and produced at MathLab Recording studio, and mastered at The Grid, by Christian Donaldson (who currently is working on the new album for ’The Agonist’). For the graphics we´ve had the honor to work with the talented Sanver Studios. We´re glad to have all these professionals around us, and excited to see where this collaboration takes us!”

Worm stated:
“It is no more a secret that I have a big admiration for the nordic attitude and general talent. Zephyra is one of these examples: committed artists, realiable human beings with wide vision and loyal behavior. These guys showed me their integrity during this year of hard work together so I am absolutely proud to announce their signing with our label. The record has be supervised for long time by me and Jonathan and now you all can check the amazing results out just by listening to Zephyra’s amazing music. These guys worked so seriously on the whole project and I am sure that you all out there are able to understand the huge value of this combo. Support Zephyra, they absolutely deserve your attention.”