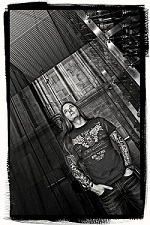 As many of you already know, Maurice Swinkels (singer of LEGION OF THE DAMNED) had to abort his studio vocal sessions for the upcoming new studio album entitled “Ravenous Plague” due to private reasons. Maurice settled a new date with producer Andy Classen to finish his recordings. Because Stage One is booked for the next couple of months and also due to Andy’s vacation coming up, Maurice will be able to finish his vocals after summer, this will mean the album release will be late 2013, early 2014, an exact date will follow.

Of course it’s a bit dissapointing for all of us, but we are sure it’s worth the long wait, because the new album is LEGION’s fresh new start with new guitarist Twan van Geel, also the band recently signed to NAPALM RECORDS, which will release the new album in a really nice limited packaging.

However, to add more salt into your painful wounds, the band also has a nice surprise coming up with one of the songs that are already recorded and finished, more news about that by the end of April 2013.

For now, hang on tight and LEGION OF THE DAMNED will see you at the upcoming summer festivals: ExtremeFest, Wacken Open Air, Queens of metal, PartySan and Metaldays where they will perform for the very first time with their new 2nd live session guitarist Hein Willekens, and you can be sure they will play 1 or 2 new tracks, so BE THERE!