Mountains of Dead, the newest platter of violence from Kansas City death merchants Marasmus is now available via Disgorge Media. Among the most impressive and destructive forces in a region that gave rise to Order From Chaos, Angelcorpse,Origin and Dikreet, Marasmus is quickly rising to prominence in the death metal world. To celebrate the release of Mountains of Dead the online portal for Hails & Horns Magazine is offering a double-fisted dose of Marasmus’ malevolence-laden USDM with streams of “Shut the Fuck Up And Die” and “Casket Made of Ivory” posted at this location. Mountains of Dead is available for purchase here. 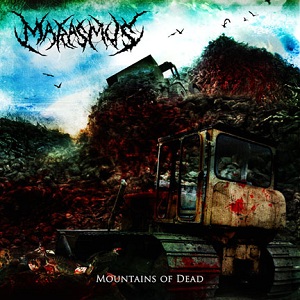 Marasmus was born in late 2007 out of frustration from the lack of real Death Metal in the Kansas City scene. The beast was spawned when battle-hardened area veterans who had formed a bond through various local bands over the years. Since then those bands have faded into memory and Marasmus started writing. With new breath and renewed inspiration, the band came to life in an attempt to bring the genre back to the city devoid of trend-driven staples like breakdowns and without compromise. Even at the band’s inception, they had offers to tour with national acts and had already played their first show with Death Metal giants Drawn and Quartered. Little did they know at the time, the immediate future would see Marasmus sharing stages with bands like Nile, Origin, Lecherous Nocturne, Hour of Penance, The Black Dahlia Murder, All Shall Perish, Cannabis Corpse, Overkill, Master and many others. Marasmus has no remorse and no quit in their blood. All that matters is the unrelenting guttural mayhem that they have created as artists and as a lifestyle. Not one member is trying to conform to any traditions or any fads, just the uncompromising brutality that is the beast of metal disease known as Marasmus.