EPISTASIS integrates the talents of guitarist Kevin Wunderlich, bassist Doug Berns, drummer Alex Cohen (also of avant-death metallers, Pyrrhon, and tech-death legends, Malignancy), and is fronted by Amy Mills on vocals and trumpet. Mills has also contributed trumpet parts on new albums from Castevet and Psalm Zero. The quartet, while impossible to define or describe in few words, culminates a wide range of eclectic influences into a bizarre, otherworldly soundtrack of unrestrained creativity with an edge of pure lunacy. Much like labelmates Ehnahre, EPISTASIS crafts an unconventional, complex sound that suggests just as much kinship with the darker and more malevolent realms of prog rock (Univers Zero, Present, Red-era King Crimson) as it does with the more outré fringes of black metal, delivering a kind of nightmarish dissonance shot through with scenes of shocking surrealistic violence and flashes of phantasmal beauty. 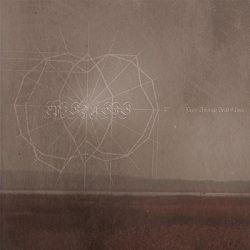 On their new six-song mini album, Light Through Dead Glass — the follow-up to their 2012-released self-titled album on The Path Less Traveled Records — EPISTASIS‘ delivery is that of a band which has re-emerged with a much more focused and fleshed-out sound on this dark new vision of atmospheric dissonance and surrealistic heaviness. Recorded by Martin Bisi (Sonic Youth, Swans, Unsane), with this new collection of songs, the band has evolved into something much darker, the music shifting from passages of moody, understated atonal melody into blasts of frostbitten discordant blackness and lurching, angular riffage.

Crucial Blast will deliver Light Through Dead Glass in digital and CD digipak formats on April 1st, 2014. Watch for new music from the release to leak its way into the public amidst the announcements of new EPISTASIS live performances in the weeks ahead.