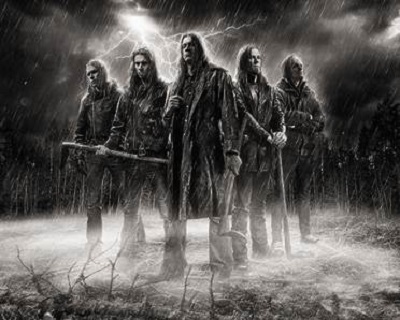 THE UNDISPUTED champions of ‘Swamp Metal’ return to the scene with new studio album, ‘SEVENTH SWAMPHONY’, the follow-up to 2010’s ’12 GAUGE’ release.

After 15 years together, with six full length offerings under their collective belt, 2013 sees the Finnish musicians delivering Album No. 7 – an eight-track release showcasing this Oulu outfit’s trademark frantic, yet melodic death metal style, tempered here by a new-found ‘epic mournfulness’.

“This album marks a milestone in our careers. We have a new keyboard player, which has given a fresh edge to the music, and we are of course very satisfied with the new material. That is why we wanted to give the songs the best possible chance without compromise; we feel very lucky and privileged to have worked with JENS BOGREN.”

KALMAH (‘FROM THE GRAVE’ in Karelian) will play DARK RIVER FESTIVAL in FINLAND this summer with more festival and UK touring plans to be announced.