Las Vegas, Nevada’s answer to the question you were too embarrassed to ask, THE FAT DUKES OF FUCK, will release their newest platter o’ perversion, Honey From the Lips of an Angel, on September 25th. Hilarious, infectious and demented all at once, this is an album demands repeated spins, even though every ounce of decency you might possess suggests otherwise. Vegas-based music blog, onethirtyeight.org best described the band as “…a pornographic musical avalanche, consisting of sharp Metal parts and Angry boulder sized Rants that gain momentum the longer it drunkenly rolls down the hill.”

Visit www.thefatdukesoffuck.com to check out selections from Honey From the Lips of an Angel. Pre-orders are now being accepted. 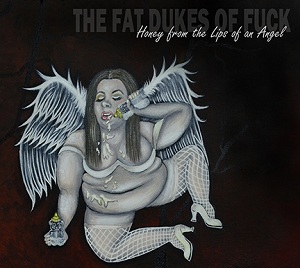 1. The Mighty Bulge
2. Sorry About Your Dick
3. Oral Agenda
4. Prelude to the Greatest Night of Your Life
5. Step Aside and Let That Fucker Dance
6. Cigarette
7. I Killed a Small Child
8. Let My People Grow
9. Honey from the Lips of an Angel

On September 21st, the band will host the “Pissing on the Lips on an Angel: An Exhibition of Art by The Fat Dukes Of Fuck & Friends” at Blackbird Studios in Las Vegas. This night of food, drink, music and art with works from The Fat Dukes Of Fuck, David Yow, Athena and many, many more will serve as an album listening party and feature an early screening of the video for “Cigarette,” directed by Dustin Mills (The Puppet Monster Massacre).

Is the name any indication of musical lunacy and prurient lyrical content? You’re god damn right it is! The Fat Dukes of Fuck is a demented rock outfit that gives a whole new meaning to Attention Deficit Hyperactivity Disorder. Wild-eyed and twisted, the aggressive outrageousness of this band is matched only by a their uncanny ability to turn it all into a catchy song. Grounded in a sort of off-the-rails version of Clutch and channeling the spirit of Mike Patton, The Fat Dukes of Fuck will launch a drug-addled shitstorm one moment and stop on a dime to bust out a riff that could have appeared on a classic Black Sabbath album the next. The Fat Dukes Of Fuck sound like a pornographic musical avalanche, consisting of sharp Metal parts and Angry boulder-sized Rants that gain momentum the longer they drunkenly roll down the hill. Predictability is not in the cards and a more memorable batch of songs you’ll never hear than in the eye of this hurricane that is The Fat Dukes of Fuck. 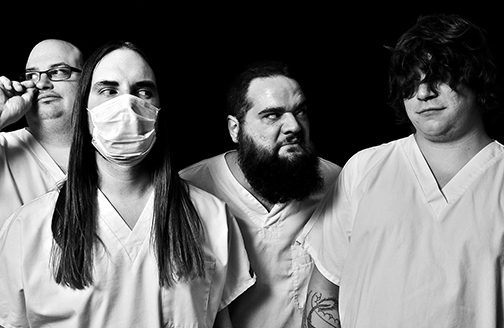 Hot News: The Fat Dukes Of Fuck – Premier Video For “Cigarette” On PureGrainAudio.com

Hot News: The Fat Dukes Of Fuck Release Honey From the Lips of an Angel Today