Mighty Music is proud to announce the signing of the French dark/death metal band SOLEKAHN. After nine years of silence the band is now ready to release their second full-length album “Nightlights” throughout Europe October 14th 2013.

SOLEKAHN is a dark/death metal band from France established in 1998. Since 2001 the trio has consisted of Olivier DB (Vocals, guitars, bass & effects), Cédric LK (drums) and Eric BR (bass & keys).

In 2002 the first EP “Suffering Winds” was amazingly welcomed by metal critics worldwide and brought tons of positive feedbacks. The Suffering Fall Tour took place at the end of that year and the band reached Germany, Switzerland & France.

With the newfound hype around the band the French label Sacral Productions signed them in early 2003 for the release of their first full-length album entitled “The Great Divider”, which was released in the beginning of 2004. Like the previous release the album was extremely well received by both medias and fans and was followed by a tour in France and Switzerland.

Metallian gave “The Great Divider” 5/6 stars and said: “…Each track is a powerful chapter that has to be read again and again to be blown away…”,while Rock Hard (FR) concluded: “…The Great Divider is a monumental album…” and gave it 9/10 stars.

There has been silence around SOLEKAHN in nine years (!!), but now the band is ready to release their second full-length album “Nightlights”. Olivier DB comments: “It was not easy to achieve a worthy follower to “The Great Divider” … actually it took six year to record “Nightlights” between 2006 and 2012.”

Six years during which the band had time to transcend their own dark atmosphere, in order to deliver their best effort so far.

The lyrical themes on the album deals with an obscure world interpreted through dreams and nightmares, focusing on the fact that for some individuals, the dark can be seen as light.

“Nightlights” appears as a dark glow in the night – a dark sound from below that enlightens the minds!

A preview video for the first track on the album, “Haste to Decline”, can be found here. 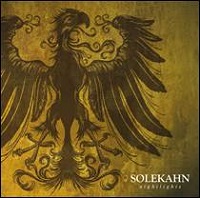