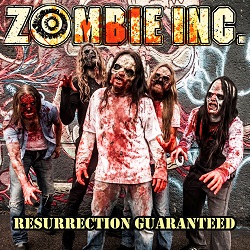 The brain-dead freaks of ZOMBIE INC. are going to unleash their new masterpiece next month!

“Homo Gusticus” was recorded and mixed by the band’s vocalist Martin Schirenc at Vato Loco in Austria. Dan Swanö himself mastered the album at Unisound in Sweden.

If you’ve asked yourself “What does it look like when a bunch of zombies are recording an album?”, check out the album teaser that was posted on the band’s YouTube channel: http://youtu.be/HJN95doObxI

The band has now announced the first single off the upcoming album!

“Resurrection Guaranteed” will be released on April 5, 2013 and will be available digital only!

The single will, of course, be available at our MP3 Download Store, too: http://massacre.musiclogistics.net/releases/35117